This month’s film to review is a favourite amongst superhero fans – 2019’s Shazam! A movie about a teenager suddenly acquiring magical powers along with the responsibility of defeating an evil villain and saving the world doesn’t immediately seem like a ‘foster care movie’, but we spend a good chunk of the story following Billy Batson’s journey to finding family. So, how authentic is Billy’s experience of being in the foster care system?

When we first meet 14-year-old Billy, he’s run away from 23 foster homes to desperately search for his birth mother, from whom he became separated while at a carnival ten years previous. Something to be noted straight away is Billy’s favourable and optimistic view of his mother – who appears kind and caring in his memories. Despite how many years have passed, he chooses to believe it is his own fault she lost him and that she has been searching for him the entire time. This is a common coping mechanism for children who are separated from a parent, as their brain creates a rose-tinted lens to suppress any possible abandonment or painful trauma. Billy is reluctant to settle into a foster home, because he says, “I don’t need parents to play make believe with – I got a mom!”. This is a good reflection of kids who struggle with a lack of closure in their birth family situation, either because it is continually unresolved, or they do not have enough information in order to fully understand it. This means sometimes they are left with a strong sense of hope and yearning for answers.

When he is picked up by the police and brought back to his social worker, he is told he is to move into a group foster home. It must be noted that the character of the social worker appears to have little sympathy for Billy’s situation. Despite the concerning fact that he was reported missing two full weeks ago and has only just been located, she tells him his previous foster parents don’t want him, and arguably neither does his mother – even reminding him that she never looked for him. A good social worker should never speak to a vulnerable child in this manner, and it could be triggering for those in care to witness someone they relate to being reminded that he is unwanted. She justifies her language by saying, “it’s time somebody looked you in the eye and told you straight”, fueling a problematic ‘tough love’ approach which, in reality, only alienates vulnerable young people even further. Billy responds saying he can take care of himself, which is unsurprising and authentic to the sense of isolation and independence some teenagers in the foster care system strive for due to a lack of trust in the adults around them.

Regardless of his wishes, Billy is sent to a new foster home, and we meet the whole family. Rosa and Victor, the foster parents, are refreshing to see on screen. The typical film and television take on foster parents is to depict a nasty, uncaring person who is usually only in it for the money, meaning they are emotionally and/or physically absent. In the real world this is extremely rare, and this constant portrayal does a disservice to the millions of foster parents around the world who dedicate their lives to caring for vulnerable children. Rosa and Victor immediately reassure Billy (“we know how overwhelming it can all be, new house, new faces”) without putting any pressure on him to settle or come out of his shell quickly (“take it at your own speed”). One of the 5 new foster siblings Billy gains is Freddie, who he is to share a room with (although in UK foster care, unrelated children would not share a bedroom). Despite Freddie’s talkativeness, Billy is reluctant to engage with him and pushes him away both at school and at home. After Freddie tries to relate to him; “I get it. You’ve been screwed over way too many times, you don’t trust anyone”, Billy responds harshly with, “I didn’t steal your dumb bullet”. It is common for foster children to emotionally close off because they do not know how long people will be in their life, meaning they often do not want to connect with anybody through fear of becoming hurt when they lose them. What finally brings the two boys together is when Billy witnesses Freddie being bullied for not having a mother and stands up for Freddie, beating them up. It is a reality he truly understands, and so he feels a responsibility to

At this point in the movie, Billy runs away and accidentally finds himself in a magical cave where he becomes Shazam, a superhero with powers. As this also turns him into an adult man, he cannot return to the foster home and so Rosa and Victor believe he has gone missing. Here, we get a really authentic perspective on what it can be like to be a foster parent, where Victor reminds Rosa that, “It’s not a home until you call it a home. It’s something you choose. All we can do is give him a place full of love, whether he chooses to call it a home, that’s up to him”. It’s important to remember that no matter how much support and shelter you offer a vulnerable child, calling a new place ‘home’ can be very overwhelming and having patience with them is vital. They do not owe their foster parents anything – every child has a right to a safe environment. They agree that when Billy is found, they will be the first to take him back, open arms.

The next section of the movie revolves around Billy and Freddie figuring out Billy’s new powers and the two of them using it to make money and gain clout. They go viral on the internet, and Shazam becomes a sensation. Billy is even able to return to their foster home as himself when they realise he can magically transform between his 14-year-old self and his adult alter ego. After some time passes, a rift forms between the two best friends, as Freddie feels Billy is being ungrateful and only using his gift for superficial means. When Billy bails on their plan to get their own back on the school bullies, they fall into a fight where Billy claims, “Gratitude doesn’t mean having to be clingy” to which Freddie responds, “’Me Time’ could also be construed as pushing away [your] family”. It is here that it becomes clear Billy does not have a concept of family after feeling so alone for most of his development years. He believes needing other people is clingy, and he even says to Mary, his older foster sibling, that “families are for people who can’t take care of themselves” and that she should always just look out for herself.

The emotional climax of the film is when Billy’s foster siblings help to locate his birth mother, and he goes to finally meet her. This is an incredibly tough development for Billy, as it becomes clear to him that not only was she not looking for him over the years, but she even spotted him after they lost each other and made a decision leave him behind. She explains that she saw him with two police officers who found him and realised they could do a better job taking care of him than she ever could. The film shows again the same flashback we saw at the start of the film but now, no longer in Billy’s perspective, we see the reality of a struggling and incapable mother, who is tired and short with her child. Billy’s idealised memories are shattered and after she fails to step up and tells him it’s not a good time for her, he has a sense of realisation and tells her, “I have to get back to my real family”. This scene reflects an upsetting reality for a lot of children in foster care, but it does a good job of not completely villainising the birth parent. More often than not, they do not want to lose their children, but are incapable of providing adequate care due to personal struggles and lack of support. We can see Billy belongs with his foster family, yet we’re still able to sympathise with his mother’s difficult situation.

In the last stretch of the film, Billy fights the evil villain, Dr. Sivana, with the help of his siblings. His emotional growth can be seen in his plead to Sivana, “I get what that’s like, feeling like you’re all alone in the world, feeling like there’s that one thing, if you could just find it, you’d finally be good enough”, where we can see Billy has come closer to understanding his own journey in the foster care system and his closure with his birth mother. When he says to Freddie about Sivana, “if he can’t protect his family he’s not much of a hero”, we know that Billy has come around to the concept of needing others and the benefits of found-family. This is a very different Billy to the wildly independent and stubborn one from the start of the story, and the message of the film is strongly reflected in the symbolism of him needing every one of his siblings to defeat Sivana. He splits his 6 different superpowers across all 6 of them, giving them all one power each, and they all save the world together, with Billy admitting, “what good’s power if you got nobody to share it with”. A nice touch that brings the film full-circle is Billy giving a scared little girl at the carnival a toy tiger – something he wanted as a child, but his mother could never give him. This could illustrate him coming to terms with his past and allowing himself to move forward with his new home, where he is loved, supported and safe.

Verdict: Despite a couple of issues involving an intolerant social worker and a bit of a cheesy, ‘perfect’ ending, Shazam! provides a surprisingly good representation of what it can feel like to be in the foster care system. Billy goes on a moving journey throughout the film, learning how to adapt and accept new people into his life, as well as understanding the importance of needing others.

Note: It must be observed that fostering depictions may be accurate for the US whilst still being inaccurate in terms of the UK system. 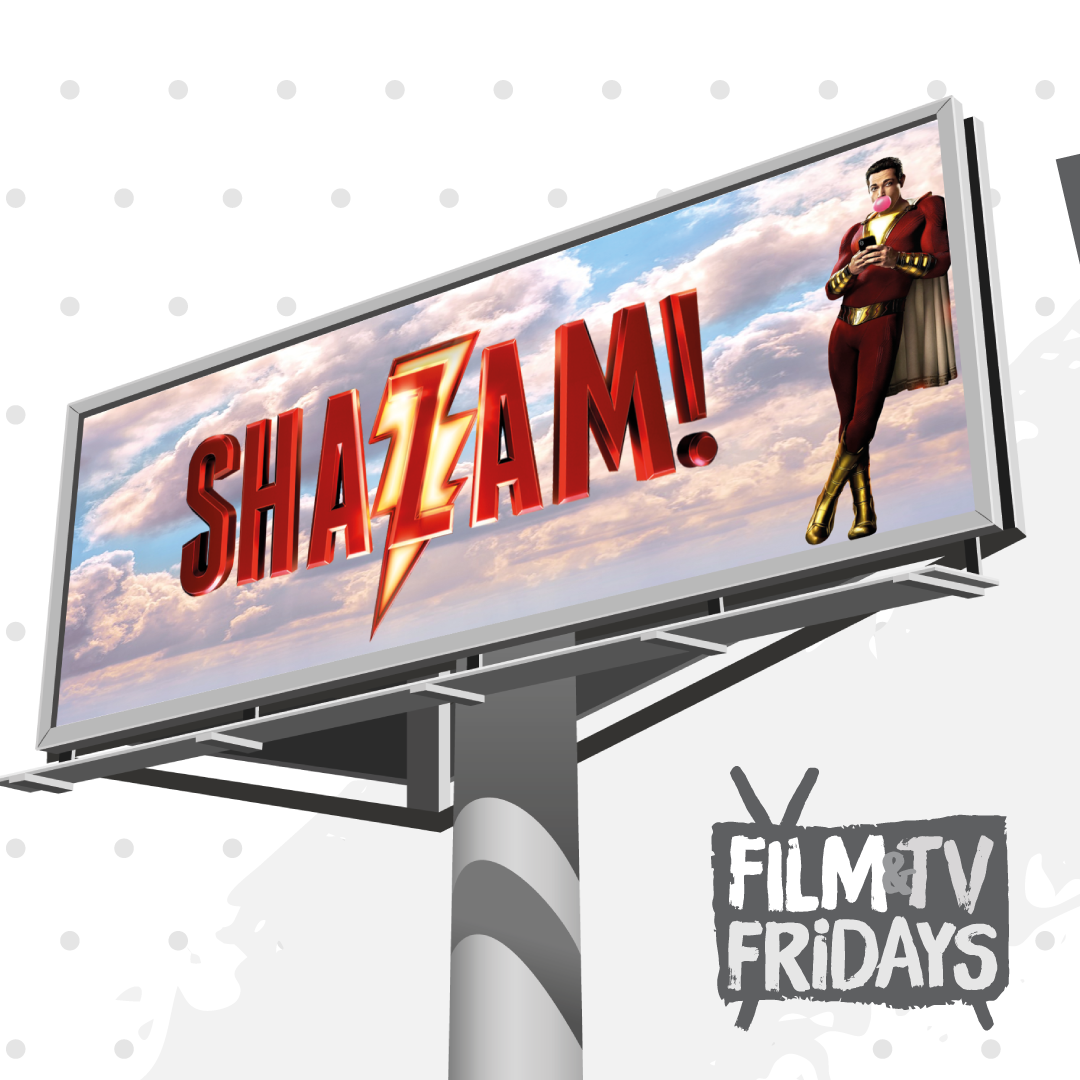